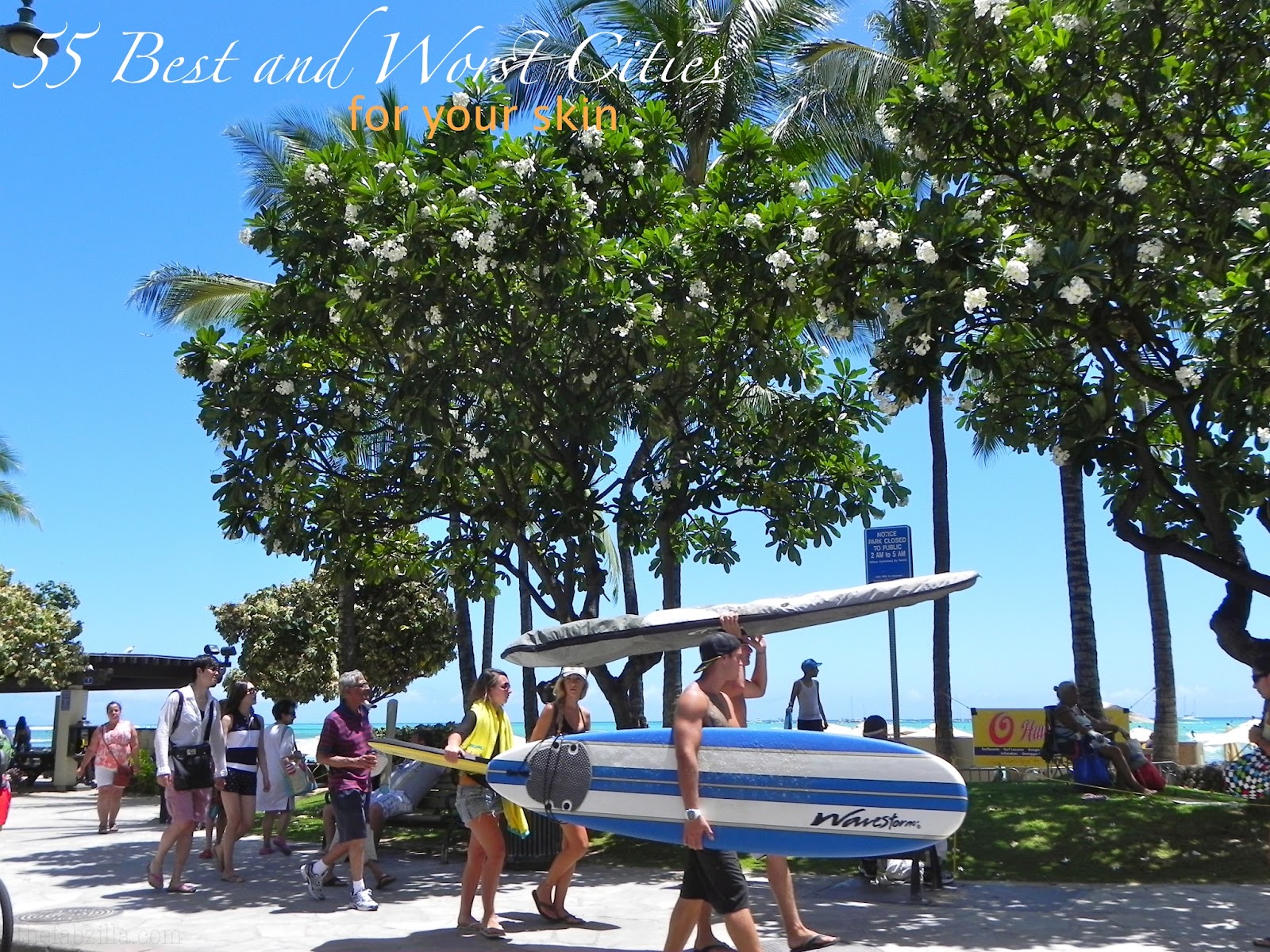 Daily Glow, an online beauty and skincare resource, released this interesting infographics on the best and worst cities for your skin. Dermatologists per capita, skin cancer rates, and healthy lifestyle are some of the indicators used to find out which of the cities in the US have the most glowing complexions. Of course I was ecstatic to see Honolulu on the Top 10 Best List. What about your city?

10 Best Cities for your skin

1. Portland, Oregon ~ Portlanders eat healthy, exercise more and smoke less. Having long rainy season is a blessing more than a curse because it makes them stay out of the sun.

2. San Francisco, California ~ This city has the lowest number of tanning salons per capita in the US. Dermatologists abound, has low skin cancer rate, and overall has active citizens.

3. Seattle, Washington~ Has low ozone days and high number of overcast days. It also boasts of institutions that teach people the importance of healthy lifestyle.

4. Baltimore, Maryland ~ Has one of the lowest cases of melanoma in the US.

5. Chicago, Illinois ~ Has the highest number of skincare specialists in the US. Having shorter summers mean lesser chances of being exposed to sun’s harmful rays.

6. Honolulu, Hawaii ~ Has the lowest rate of air-particle pollution in the US and zero, as in nada, high ozone days. About 34% of the adults engage in physical activities for 20 minutes or more at 3x a week.

7. Boston, Massachusetts ~ Has the highest number of dermatologists per capita. Citizens generally live an active and healthy lifestyle.

8. New York City, NY ~ Has one of the lowest cases of skin cancer in the US. The recent ban of public smoking is also a big factor.

10. Austin, Texas ~ Has the most physically active people with about 36.6 % of adults engaged in vigorous activities for more than 20 minutes at 3x a week.

10 Worst Cities for your skin

1. Las Vegas, Nevada ~ Over a fifth of the population are smokers. The hot, desert-like temperature makes the citizens more prone to wrinkles and other skincare problems.

3. Fresno, California ~ Has high level of pollution and bad air quality with shortage on dermatologists.

4. Sacramento, California ~ One third of the adults suffer from sunburn with slightly higher than average skin cancer death rate.

5. Los Angeles, California ~ Has the highest number of high ozone days at 92.3 days; it also has very low number of dermatologists per capita (I’m actually surprised with this fact, what with the vain celebrities in Hollywood!)

7. Charlotte, North Carolina ~ Ranked as the 10th worst city for ozone pollution in the US, according to The American Lung Association.

8. Memphis, Tennessee ~ Has the lowest physically active population, according to the CDC, with very low dermatologists per capita or 3 per 100,000 people.

9. Forth Worth, Texas ~ Tanning beds in every nook, not good!

10. Tulsa, Oklahoma ~ Has the highest skin cancer death rate in the US.

For more facts and figures, check out Daily Glow.

2 thoughts on “55 Best and Worst Cities For Your Skin”